People have asked me why I chose the name, Writing Under Fire, for my blog. Many times, finding the time to write is near impossible with my busy life.  Therefore, even though writing is my passion, I must put my “feet to the fire” and force myself not to let  distractions like, eating, sleeping, working my day job, cleaning house, cooking (trust me, nobody want me to do that.)  Who needs that stuff anyhow?

Are you burning the candle at both ends?

Writers, do you struggle to find the time to write? What is your secret to keep you writing? Do  have a dedicated time every day to write? Do you scratch out words sitting in your car to pick up kids from school, or sitting on a bench during your child’s soccer practice?

Or if you are an avid reader, do you skip other essentials in order to read? I’d love to hear from you. Readers, what about you? My first brush with danger was when I set the latrine on fire at Girl Scout Camp when I had the kerosene lantern turned up too high. Interesting that Jason’s picture and my “brush with danger” both included fire.

I’d like to introduce you to one of our youngest writers. Megan (Truenow) Kiffmeyer is a 2004 graduate from St. Cloud Technical High School. She was a writer and editor for the high school paper. After graduating, she attended St. Cloud Technical College and received an AAS degree in Credit and Finance. Megan married her husband, Brian in 2007. They welcomed their first son in 2008, and a second son in 2009.

She currently resides in Kimball, Minnesota. Megan is a part of their local Fire Department Auxiliary, and is the wife of a fire fighter.

Her debut novel,  Moving On, is the first of a series that focuses on three couples who all have ties to the Hutchinson, Minnesota Fire Department.

Megan, what drove you to write your novel?

I had started reading more books after receiving a Kindle for my birthday. Out of habit, I was reading a lot of romance novels, and had a hard time finding books with the main male character as a fireman. I’m married to a fireman, and figured there had to be other wives that would want to read the same thing.

How long did it take to write your first draft?

I started writing the first part of June 2013, and had it done by the end of August. It took me a few weeks to outline the story in my head before any of it was written. I set my own deadline because we were moving, and wanted to have it done before the move.

Do you always use the same POV?

My first book is written as third person switching between the lead male and female, but I would like to try first person. It was hard using she/her all the time.

Tag Line:  After Beth’s husband dies responding to a fire department call, she fears finding new love. But sparks fly with a new member of the fire department, and Beth has to decide if she can handle a new relationship. Will she take the chance on another fireman? 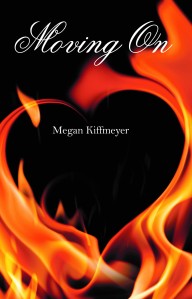 What was the hardest part in the writing process?

My husband is on our local fire department, and for me it was difficult to come up with names and situations that were not too closely related to people in our town and on the department. The characters are purely from my imagination.

Any advice for new writers?

Keep writing! If you enjoy writing, keep trying. The more patience you can have, the easier the process will feel.

Do you stick with the same genre when writing?

My first novel is considered a romance, and I will write more romance novels. I would like to write a children’s book with my boys as the characters, but I haven’t figured out what kind of story I want it to be yet.

Where can readers buy Moving On?

Beth had known Josh since the first year of college. He was from Hutchinson, the town they later called home. She grew up in the cities, and wanted to get out of the busy, urbanized area. Beth had always felt trapped by the tall buildings and fast paced way of life. Both had attended many of the same general education classes, and the friendship grew into love. He proposed the week after graduation, and they got married the following April. Even at 23, she knew with him was where she was meant to be.

One thing that drew Beth to Josh was his willingness to help. It was no surprise to her that he desired to follow his dad’s footsteps and become a member of the Hutchinson Volunteer Fire Department.  He joined the spring before school was out, and commuted from Hutch to school every day. He didn’t want to miss any called and let his numbers slip. The fire department was a second family to him.  His best friend Petey, the brother he never had Josh always said, was the best man at their wedding.  It was a great source of friendship for both Josh and Beth.

They had been married 3 years when they started talking about having a baby. They were lying in bed tossing around ideas of what to name the future little one when Josh’s pager went off. He kissed her good-bye, and told Beth he loved her before grabbing his socks and getting his jeans on as he ran out the door. Beth caught part of the end of the page, hearing it was a car wreck on the main highway. Please keep the guys safe and get the people the help they need, she said in a quick little prayer. It became habit when she knew he was on a call.

A few minutes later, Beth heard the sirens. Their house was less than a mile from the fire hall, which usually resulted in Josh getting on the first rig to leave. About ten minutes later, there were more sirens. Car accidents meant at least one fire truck, the rescue rig, and an ambulance. She waited to hear the third set of sirens, and then got out of bed to get some things done. Josh wouldn’t be back for a while, longer if it was a really bad accident.

Beth worked on getting laundry done, cleaning the living room, and headed to their office in the half story of the house. The office was on the main level, and their room and a third room that was mainly used for storage in the top level. Beth went upstairs and stood at the doorway of the storage room, trying to picture what it would look like with a crib. They were ready to be parents. Josh would be a great father.

As the afternoon went on, Beth found herself cleaning the spare room. There were a lot of things kept in the room that could be moved to the basement already. She took a trip down memory lane as she flipped through photo albums of their wedding and honeymoon. Beth found a box in the garage and labeled it “Photos” before adding the albums and other pictures to it. She brought the box to the basement, along with a few other boxes.

As she came up the steps the last time, she took a look at the clock and decided to start making supper. Beth was filling a pot of water when she looked out the kitchen window and froze. The Hutchinson Fire Department car had just rolled up to the curb in front of their house. Petey got out, wearing a tired look. This couldn’t be good, Beth thought. He rubbed his face for a second, and then crossed the street and walked up to the door. The first knock on the door jarred Beth back to the present, and she turned off the water. Walking to the door, she knew Petey wouldn’t have shown up unless something had happened to Josh. She opened the door, and saw it was grim by the look in Petey’s eyes.

“Can I come in?” he asked her, leaning on the doorway.

They walked into the living room, and Petey sat on the couch. Beth stood with her arms crossed.

“I think you should sit down, Beth.”

Beth let out the breath she hadn’t realized she was holding, and sat on the couch with Petey.

“What happened?” she asked, fearing the reason he was there.

“Do you know what the call was for?” Beth nodded yes, and Petey continued. “ We were out on 7 for a roll-over. The car was smashed so bad, but being the first crew on the scene, we were doing as much as we could to assess the victims’ conditions. Josh was on the driver’s side when a truck came barreling through our scene. The driver didn’t see Josh.” He put his head down in his hands. “He hit Josh.”

Beth didn’t notice the tears falling until they started hitting her arm. “Where’s Josh? I need to go see him.”